As laid out in a Transportation Ministry circular published early this week, only two airports ⁠— Soekarno-Hatta International Airport in Tangerang and Sam Ratulangi International Airport in the North Sulawesi capital of Manado ⁠— have been designated as the two entry points for international arrivals via air travel. The decision came after the government relaxed its border closure last week. Bali Vice Governor Tjokorda Oka Artha Ardhana Sukawati, or Cok Ace, said Ngurah Rai should have been immediately considered as one of the country’s international gateways.

“Bali [should be] designated as an essential arrival [point], because [the Ngurah Rai airport] has adhered to the protocols,” Cok Ace said yesterday.

Talk has been rife in recent weeks about Bali reopening its doors to foreign tourists, with one plan under consideration being turning the island into a “tourist sandbox” emulating Thailand’s Phuket.

Cok Ace said he hopes that the central government would review the decision and set Bali as a quarantine destination for international arrivals, as it would boost the island’s ailing tourism industry. (Coconuts.co 22/09/2021)

A Canadian national was found dead at a house in Bali’s Karangasem regency on Monday, with authorities suspecting that he may have died by suicide.
The victim, identified as LB, was reportedly found covered in blood and with slash wounds on his wrists in the bathroom. His romantic partner, identified as S, was the one who first made the discovery.
Authorities said there were cuts on LB’s left arm that damaged his blood vessels, about 10 centimeters in length and 5 centimeters wide.

“For the time being our main suspicion is suicide, according to what we saw at the scene,” Padangbai Sub-precinct Chief, I Made Suadnyana, said today.
According to reports, LB had lived in the house since 2014 and had a history of undergoing surgery for pinched nerves, which is suspected to have caused him considerable pain. Authorities therefore believe that the physical pain had driven him to suicide.
LB reportedly left behind a letter containing a will before he died. The body of the deceased has been taken to Sanglah General Hospital for further examination. (Coconuts.co 22/09/2021) 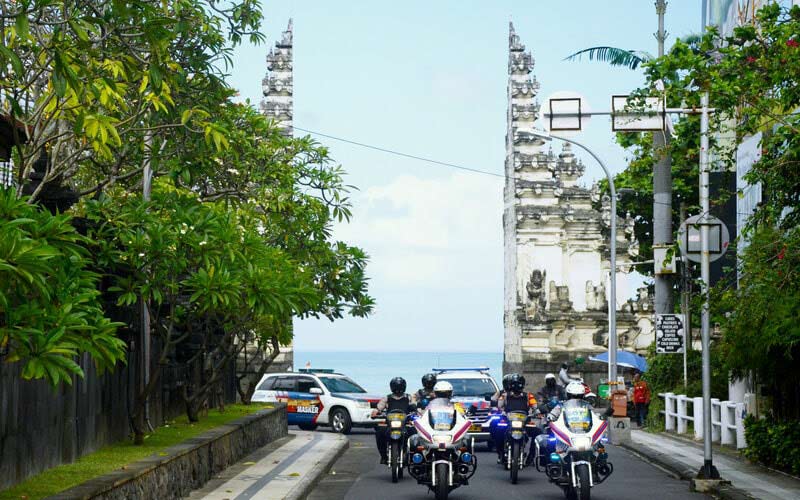 In an attempt to prevent crowded gatherings across tourist hotspots in Bali, the provincial government today announced that the odd-even traffic policy will be implemented in popular areas by the end of this month.
“The odd-even rule is aimed at limiting public [mobility] so that they don’t form crowds at tourist attractions such as Kuta Beach,” Bali Police Chief Putu Jayan Danu Putra said today.
According to a statement issued by Bali’s Transportation Agency, the odd-even rule ⁠— which only allows vehicles with license plates ending with an even number to be used on affected roads on even calendar dates and vice-versa for odd dates ⁠— is applicable to both cars and motorbikes. The rule will be implemented on roads around Sanur Beach, Kuta Beach, and in Denpasar City.

For Sanur and Kuta each, the odd-even rule will be implemented on all roads from which visitors can access the beaches. In addition, the policy will be enforced in the morning from 6:30am to 9:30am, and again around sunset time from 3pm to 6pm. Officials have yet to make further details publicly available at the time of publication.

The governor is set to issue an official circular on the matter some time later this month, but Putu told reporters today that authorities may start implementing the rule as early as Sept. 25, with authorities hoping to inform the public before it is officially enforced.
With Bali having been downgraded to Level 3 PPKM (Enforcement of Restrictions on Public Activities), members of the public are evidently not too concerned about staying away from the beaches, with various photos and clips showing people gathering in places like Sanur and Seminyak over the weekend. (Coconuts.co 22/09/2021)

The Indonesian Tourism Minister has banned people from taking selfies without face masks in all tourism areas, including Bali.

The Tourism and Creative Economic Minister, Sandiaga Uno stated that despite implementing a strict prevention protocol in the tourism areas during this reopening trial of the tourist attractions for domestic visitors, Covid-19 transmission might still occur when people get too excited during their vacation, causing them to neglect the importance of mask-wearing in the public areas.

“One of our weak points on the implementation of prevention protocols at the tourism areas is when people take selfies, they tend to take off their facemask, although it’s forbidden to do so.” Sandiaga said during his Weekly Press Briefing on Monday (20/9).

Other than that, he also expressed his concerns with the implementation of the QR code scanning at the tourism areas, which has the potential to cause large crowds when inevitable errors occur. He also explained that the government has given some leniency on their policy such as allowing children below the age of 12 years old to gain access into the tourism areas with supervision from their parents. “As long as the parents have completed the second dose of the Covid-19 vaccine, which can be seen in their PeduliLindungi tracing apps, we let the management of each tourist attraction including shopping malls decide whether to allow them to get in or not.” Sandiaga added.

However, he explained that the influx of domestic tourists began to surge since the government relaxed some rules and implemented some leniency for businesses to reopen under strict protocols. He encourages people to stay alert and keep complying with the government’s instructions. He also urges travelers to avoid visiting tourist areas with large groups, and start exploring tourism villages to reduce the risk of creating a cluster of Covid-19.(thebalisuns.com 22/09/2021)

The General Manager of Indonesia Ferry Ltd for Ketapang Port East Java, Suharto confirmed that Gilimanuk and Ketapang Port is one of the main entrance for domestic travelers to gain access into Bali will be allowed to be fully operational again as the government decided to give leniency to attract more visitors by Monday (20/9) at 12:00am.

“We will officially begin to fully operate 24 hours a day again, after 2 months of being restricted due to the emergency partial lockdown which only allowed us to operate from 6:00am until 8:00pm.” Suharto said after welcoming the Minister of State-Owned Enterprises, Erick Tohir on Sunday (19/9). Suharto also admitted that the passengers of ferry services have significantly dropped since partial lockdown was implemented in the beginning of July 2021.

Despite being fully operational, each visitor is required to show proof of a Covid-19 vaccination and negative results from a rapid antigen test before gaining access to the island. “Since the government implemented the curfew over 2 months ago, the number of passengers has 70% dropped. And although Bali is not considered a red zone area of Covid-19 anymore, we haven’t seen any significant changes.” Suharto concluded.(thebalisuns.com 22/09/2021)

Hundreds of Australian nationals have been transported back to their home country with a repatriation flight from Bali.

The Stakeholder Relation Manager of Angkasa Pura I for Bali Ngurah Rai Airport, Taufan Yudhistira confirmed that around 200 Australian nationals were scheduled to go back home through Bali’s Airport on Saturday (18/9). “Over 200 expats from Australia were sent home from Bali with a repatriation flight on Saturday evening through Qantas Airways to Darwin.” Yudhistira said on Saturday as he prepared the repatriation process.

Yudhistira explained that each passenger is required to go through a proper health and document screening before entering the airplane. “Our airport authorities will assure that everyone is safe and pass all screening procedures such as temperature checks and document validation before checking-in and entering the waiting room.” Yudhistira added. Qantas Airways was scheduled to depart from Sydney and arrive at the Bali Airport before continuing their flight to Darwin on Sunday (18/9) around 1:10am.

Some of the expats who were transported home with this repatriation flight admitted that they were forced to go back as they’ve lost their businesses and became stressed out since the Covid-19 pandemic struck in Bali. One of the expats named Matthew said that he had to go back home in order to find a job because he’s lost his income in Bali. “I was stressed due to the Covid-19 pandemic in Bali, so I decided to leave and will be back when things get better.” Matthew said.(thebalisuns.com 22/09/2021)

Email a copy of "Local News" to a friend